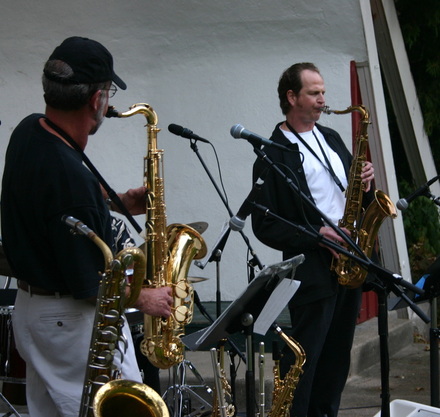 I am constantly reminded of the element of pleasant surprise involved in reviewing Jazz CDs.  That is the primary reward for doing so.  Some of the most interesting music comes from the most unexpected, the most on-the-surface unpromising recordings received for review.  Such is the case of the Wonderland Jazz Ensemble, a quintet consisting of excellent musicians from the Chicago area and Michigan, which has now released its first CD.

As the album starts with Rahsaan Roland Kirk’s lightly swinging “My Delight,” sure enough, the performance is a delight, and it is obviously rooted in Jazz tradition as a springboard for successive improvisations over the changes.  Elferdink’s Dexter Gordon-like sound on tenor sax is especially notable.  However, this introductory piece, with its string of solos by the group’s members, does not sufficiently suggest its potential.  The minor-keyed “A Wish” too is delightful enough, understated in its performance, though the professional maturity and solid technique are unavoidably evident, particularly when Elferdink solos on soprano sax and pianist Eric Thorne takes over to improvise.  However, the potential of this quintet of two reed players attains fulfillment on the combination of the traditional Baptist hymn “Down to the River to Pray” and Richard Evans’ Lullaby of Forrealville”, first recorded on Sun Ra’s 1956 Sun Song.  Elferdink on tenor and Ken Morgan on baritone saxophone start the medley mournfully during two choruses without accompaniment, virtually drenched in Blues and suffused with soulfulness.  Then, bassist Jeff Beavan’s uplifting vamp animates “Lullaby of Forrealville” as the tempo picks up, allowing Morgan to growl and snap and wail on baritone sax as Elferdink harmonizes…before Beavan next creates a double-time feel under the saxophonists’ unchanged tempo for improvisation over Blues changes.  Elferdink retains his Texas-tenor sound with the beseeching quality that reaches out to listeners.  And A Wish attains its potential suggested in the first few tracks, which are merely a suggestion of the fun that ensues after the medley.  Elferdink’s “Partly Clouded” is a breezy, swaying waltz that Morgan brightly commands on flute as a contrast to the gospel-like feel that precedes it.  Thorne’s engaging solo in the center of the piece makes clear how important is his contribution to the group’s overall sound – a sound that is unified in its intent and spirited in its execution.  The centerpiece of the album is Elferdink’s suite of three movements: “Think Back,” Walk Back” and “Talk Back.”  While one may expect the pieces to be connected, mere variations of a single theme, instead they are separate.  “Think Back,” true to its mood, is pensive and of moderate tempo as Elferdink provides piquant melodic substance on soprano sax.  In contrast, “Walk Back,” yes, involves Beavan’s walking bass lines…and more…as he alternates the walk with a saunter.  Finally, “Talk Back” involves a humorous, and somewhat complex, dialogue between Elferdink and Morgan, highlighted by the propulsive accented pattern at the end of the written arrangement.  And so, A Wish does offer ultimately a delightful continuing interchange between the two saxophonists, more often contrapuntal weavings than harmonized one-on-one support, as they are backed by an empathetic rhythm section.  Sprinkled throughout the album are nuggets of discovery.  The quintet continually provides unexpected ideas, either as part of the arrangements or through spur-of-the-moment improvisation. As a result, these polished and committed musicians have helped make the reviewing of CDs once again a serendipitous pleasure.